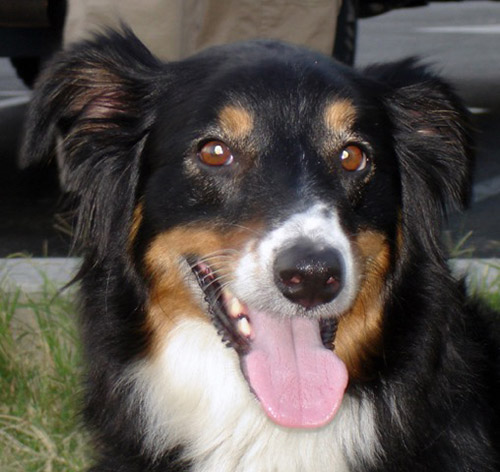 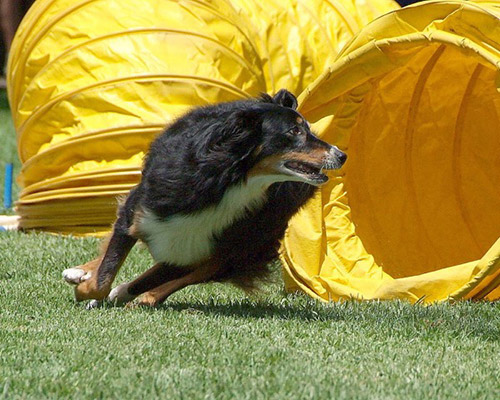 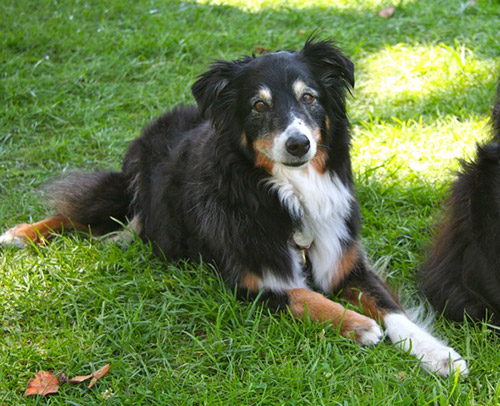 I can still see that image of this little black ball of fluff wiggling her butt in happiness to see someone come visit her in this large shelter kennel. I got a call from the Camarillo shelter saying they got in a 9 week old black tri female Australian Shepherd. Knowing that Aussies come in all shapes and sizes, I along with a friend went to check her out. One look told us that this was a keeper. She was so content in playing in her kennel, greeting everyone that passed as if it was her home. She had been found roaming the streets of Moorpark and now that I know her personality, on many counts I can see why this occurred. After being spayed, yes at 9 weeks, I brought her home to meet her brother Casey, another rescue Aussie 18 months old. Who ever had her before taught her the meaning of paper to mess on, so training this was a breeze. She soon learned where the back door was but would miscalculate her bladder strength and mess at the door. Time solved this problem and for a puppy she never destroyed any item that wasn’t deemed for dogs, squeekies were another matter. 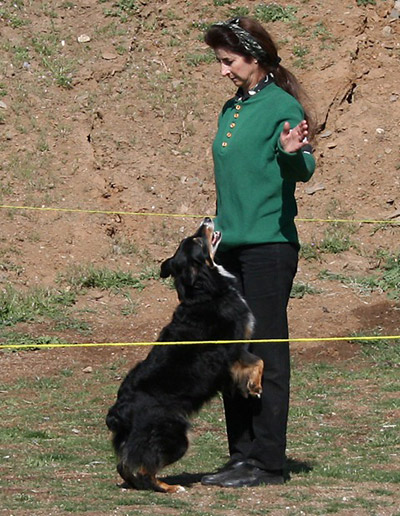 I enrolled her in a puppy class so that she could be socialized to people and dogs early on, but this was not an issue. Scout loves all dogs and people and will wiggle her butt so fast it could propel her forward. I have put a hula skirt on her and brought her to schools to perform that Hawaiian dance. The kids love it. Scout has an amazing mind and can learn a trick or task in a matter of minutes but she is very calculating. At a young age she wanted a toy that Casey had in his possession, so she ran to the back door barking and when he arrived to see what was happening, Scout ran back in the other room and grabbed the toy. Oh was I going to have a live one on my hands. In the puppy class we learned to heel on leash following food or a toy and Scout had this natural attention pose that the obedience world loves to achieve. I continued in that direction teaching her all the various commands required entering the show ring. Since she had great speed and was agile at a year old, I enrolled in an agility training class. This has been the love of her life. The only problem is for me to give the commands fast enough to meet her quick mind. If I don’t she will not hesitate to let me know by barking or biting my hand. Yes she does talk back if I tell her to do something she doesn’t want to do. She will do it but has to have the last word. We started entering obedience matches and even though she knew all that was required, her puppy playfulness would surface. At one in particular, doing the groups exercise, the dogs are put on a one minute sit along the ring and the handler is standing across from them on the other side. One Jack Russell Terrier decided to get up and sniff the dog next to him. 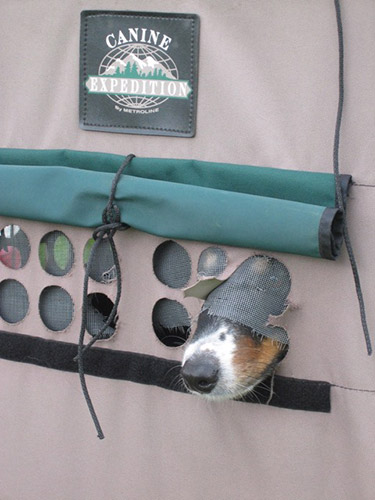 He then moved farther to visit the people. Scout decided this was great fun, “cool I’ll do that too”, so she ran up to the Terrier and the two of them buzzed the field with not a care about me or the other handler frantically calling them. After more practice and matches, which one she got a perfect 200 score; it was time to show for real. We started in novice agility and she got first places in all of her AKC/ASCA jumper events with times that far exceeded the required course time. In the standard contact events she came in the placements every time. There has been little opportunity to practice the contacts so this achievement has been good. In the obedience shows I get so many complements on her performance. Her first shows for the AKC and ASCA Novice title a she got a 198, 198.5 and highest scoring dog at both trials. Way to go Lil Scout! We have completed both titles of Companion Dog and now are working on the next level of Open in obedience and the same for agility. This has been great fun to work with a happy willing dog. Remember I have been a foster person for a few years and have had to deal with “problem” dogs, so to get one with no excess baggage is different. Rewarding but not in the same way. 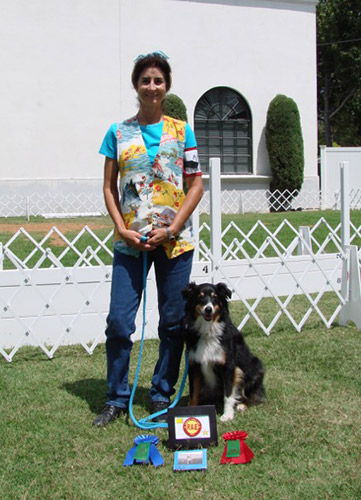 Scout has also learned a slew of tricks. Her favorite one is when I sneeze she runs to the tissue box and grabs one for me. She can say her prayers, when I bang my fingers she falls over dead and if I say road kill she rolls on her back with her legs up in the air. Shake hands, roll over, spin in either direction, back up, speak on command, crawl and a lot more. Going to the beach is a special treat. When allowed, I let her and Casey run free and they will spend hours chasing and herding all the birds that pass even if it takes them into the water. Just the feel of the sand in their toes makes them go nuts in anticipation. We haven’t tested them for herding instincts yet but would guess that it is definitely there. But by far the best thing that Scout loves to do is when my mom and I take them for walks, when we get near the coffee houses she pulls on the lead until we stop so that she can get a cookie and watch the world go by. Yes I have a “yuppie” dog. She also goes nuts when I say, “do you want to see Grandma and Grandpa?” They live next door and will race to the gate to visit. She has spent hours laying in bed or on the couch with them or hanging in the yard. Just the sound of their car or the sound of the bell on the gate gets their ears up. I am certainly enjoying this time spent with my little wiggle butt and know only great things will come in the future. Living with Scout is like living with a fun happy human, her mind is so receptive, attentive, smart but calculating.

And who is the Alpha one here?

Scout knows:
1. How to pray
2. I sneeze, she retrieves a tissue and brings it to me
3. Shake with left paw
4. Shake with right paw
5. Give me 10 with both paws
6. Bang, I say bang and shoot her and she falls down, rolls onto her back like road kill
7. “Who’s Your Buddy” If she is sitting next to a nice dog or even a  human, my other Aussie allows her to do this, I ask “Who’s your buddy”  and she will put one front leg over the shoulder of the other dog/ human. Sometimes she hits his face with exuberance.
8. Can crawl on cue
9. Can sit up and beg
10. Spin to left
11. Spin to right
12. Bark on cue
13. Backs up but with a bark like a truck
14. Will touch an object on cue to touch
15. Can roll over
16. Will give you a kiss
17. Signals, Can sit, stand, down and come on hand signals or verbal cues  from 50 feet away.
18. Go out, Can run out to a target or particular spot hundreds of feet  away.
19. Can fetch items and bring back
20. Can stay in place in sit, stand or down for 5 minutes or so.
21. Can side pass in front of me, either direction
22. Can side pass standing or sitting next to me (get in).
23. Articles, Can retrieve a scented item from a pile of other unscented items.
24. Bows
25. Pass through my legs
26. Can wave
27. Leave it
28. Heel backwards 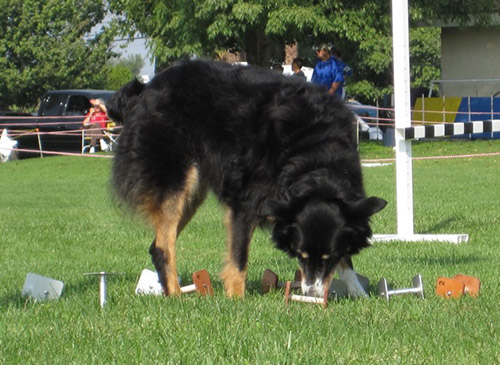 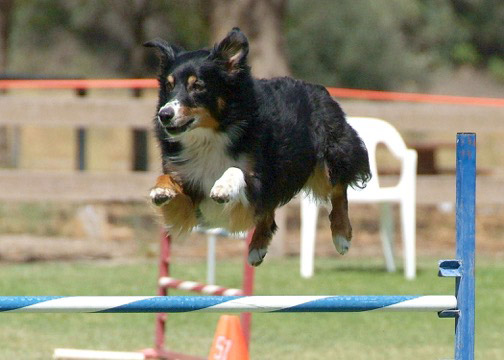 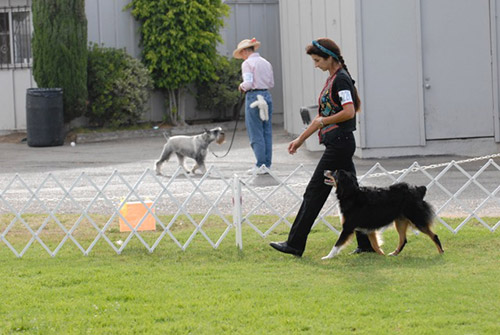 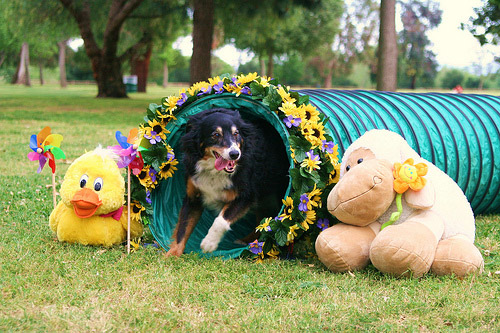