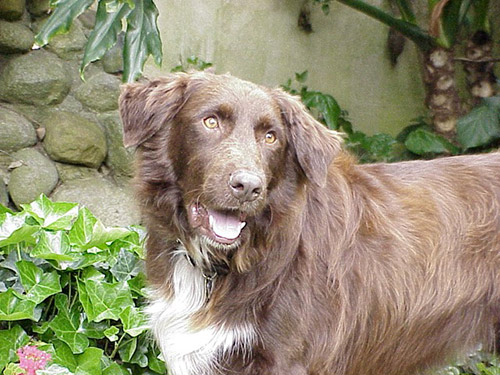 Teddy lost his battle with Cancer but was a trooper throughout his whole life. He is and will be greatly missed by our friends and family and especially me, I lost my best friend on four legs. I would like to thank everyone who sent their warm concerns and who were always there to hand him treats when he came up and begged. Teddy you deserved a longer life of happiness.

To All Rescue and Shelter Dogs

I was Angry,
I was scared,
I had the feeling
nobody cared.
I was hit,
I stayed on guard,
My life was a backyard.
Then one day,
I was sent away,
and met a lady
with a gentle way.
She gave me kisses,
She gave me toys,
She took me to places
A dog enjoys.
Now I feel safe,
And enjoy life too,
Wish this could happen
To all of you 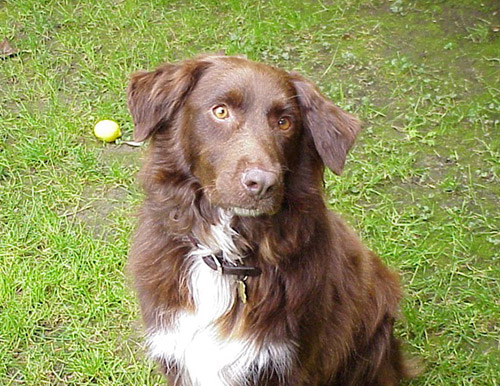 Teddy Bear, as he is now called, came to my foster care three days before his third birthday. He is a big red Australian Shepherd with very expressive amber colored eyes. A couple owned him and the wife had to give him up because she was going into a women’s shelter. You see her husband was abusing her and sadly also the dog. She gave me a brief run-down on Teddy’s personality. I was told he was aggressive towards other dogs so she didn’t take him on walks; he would get car sick so that limited his car rides; and would nervously go from room to room when first brought in from the backyard. Not a very promising picture.

I soon learned what the years of abuse and neglect had on Teddy’s health, personality and behavior. When he arrived, his coat was dull greasy, much in need of a bath, and he had numerous hot spots and scabs as a result of his constant scratching. Just walking down the street was a scary scene. He would jump when cars splashed through water, cower at heavy traffic and buses, wince at hidden staircases and lunge at other dogs. It was obvious that he had never been exposed to the outside world but instead had remained a prisoner in his home and backyard. When 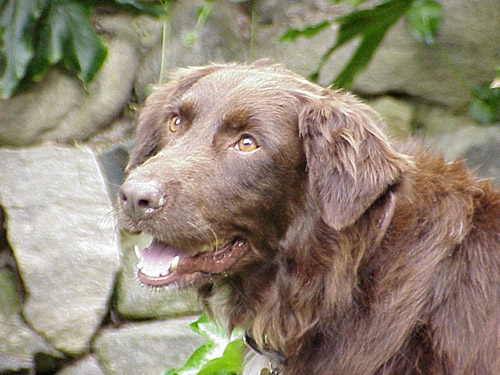 I took him for a ride in the car he would throw up so I would not feed him before a trip, started off with short rides, gradually building up to longer ones, to places that were fun and positive. I can only conclude that he was put in the car after very heated arguments at home where the wife was fleeing with her child, crying or in an angry state. The worst behavior was his attitude towards men. He would growl and cower and act very nervous in their presence. You could see the pattern that would set him off. The car driving up the driveway, my husband entering the home and walking around would transform the quiet loving dog I experienced just moments before into a scared, on guard, protective animal. The kitchen and bedroom must have been especially angry places, as he would immediately get between my husband and me when we entered these areas. Upon meeting a dog, most people will reach out to pat them on the head. Teddy would accept this from females but would back up and cower when men approached. It’s amazing he could tell the difference.

Australian Shepherds are a working breed and need a reason for being. Unless you give them a job to do, they will make one up. Teddy’s sole life in his former home and yard was to guard and protect. Whenever any dog or person approached he would sound his protest. Now he knows that friends and husbands come over to visit and sometimes bring their dogs to play with him. 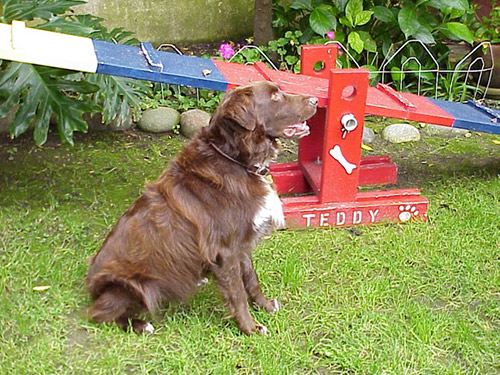 I have a calm and patient personality, which I knew was needed to bring around this dog to a happy loving animal. After three months of me exposing him to everything I could that was positive and loving, I entered him in an advanced novice obedience class. I was hoping that the exposure to other dogs, training and having fun in the park would all be a positive atmosphere. I was right. In just three months we received his Canine Good Citizen title and started to prepare for the dog show experience. By this time I decided to adopt Teddy as my own, as he was too good of a dog to give away. The Aussie Rescue Placement and Helpline, of which I am a part as a foster home, filled out the necessary papers and gave me his two registration papers, AKC and ASCA. We are now a permanent pair. He took to obedience really well, learning quickly and mastering many tricks. He knows how to shake hands, speak, roll over, play dead, back up, spin and many other games and routines. We began in AKC Novice A class and did very well. The only real challenge was the stand for examination by male judges, or their mere presence in the ring. Teddy earned 197.5, 196, and 195, all first places and in one trial were Highest Scoring Australian Shepherd and Highest Scoring Herding Dog. After one year of love and training, this abused dog earned his AKC CD, then his ASCA CD with scores of 197.5, 197.5, and 197, all first places. Thus he was ranked #6 in novice for all the Australian Shepherds in the United States for 1999. 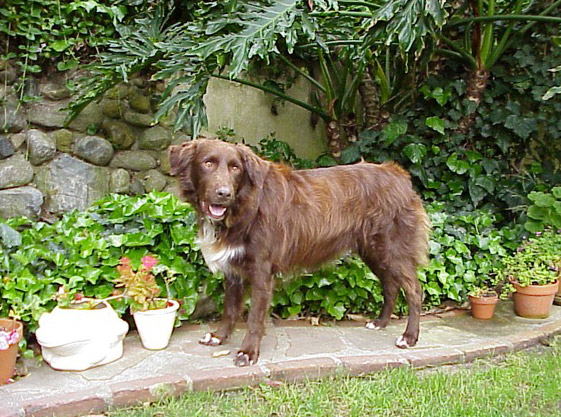 Going onto Open was harder than we thought. We did however get our AKC CDX with scores of 192, 185, 184 and ASCA scores of 191.5, and 187.5 with one leg to go. The difficulty we had was not due to training but rather sadly in August 1999, Teddy was diagnosed with Lymphoma. He is undergoing chemotherapy and other medications and doing very well, seven months remission but tends to make him lethargic at times. Before being sick we started agility lessons, which is well suited to him as he has long legs and a fast speed for running and jumping. It gives me so much pleasure to see him happily go through and over obstacles and run around free. He loves to play in the off-leash dog parks and gets along great with all the other dogs

Teddy is a much happier dog now than when he first arrived and has a shiny, healthy coat as a result. We have forged a special bond together and I believe there isn’t anything he wouldn’t do for me. I firmly believe you can take a dog of any age or background into your home and form a friendship that will last their entire lifetime and beyond. All dogs deserve a kind, happy life. Thanks to the Aussie Rescue and Placement Helpline program, Teddy now has one. To think he was almost euthanized because of his aggressive, fearful behavior. Rest assured, Teddy. .

WHEN CANCER STRIKES YOUR CANINE

What do you do when the vet tells you that dreaded word cancer? My first reaction in July 1999, when the vet said my dog of five years old had lymphoma was to cry and cry and cry. Then my intellect took over and I started to think rationally. What were my options, who do I see, what kind of treatments and who does them?

To start out I needed to gather as much information from every source I could think of regarding cancer. My initial diagnosis was from my dogs (Teddy) allergy vet whose wife was an Internist. She explained every detail about lymphoma and her recommended treatments. I then turned to my regular vet of some twenty years, who had done the biopsy, and had him explain what his treatments entailed. I spoke to friends in the dog show and breeding world, who gave me names of Oncologists, holistic and homeopathic sources and spoke to them all. Since I had never experienced cancer in dogs before all this information was new and overwhelming but there was an over all feeling that this type of cancer could be treated solely with chemotherapy and prednisone and would go into remission fairly quickly. My philosophy on health issues is in the middle of the spectrum. I feel that conventional medicine should be used but at a limit and holistic care be added to help boost the immune system. When even the holistic people said that chemo is the only way to go my decision was made.

Now who would do the treatments? Should I use an Oncologist, Internist, or my regular vet? I decided since the treatments were very similar I would use my regular vet. I felt that I could talk to him openly, he would accept alternate therapy, and I felt close to him and trusted his sensitivity so that I could cry with him when things got overwhelming. Also his clinic was large and in walking distance so at any given time I could get help now.

Since my dog had allergy problems and was abused in his past home I knew he needed to get his immune system boosted. That is probably why he got cancer in the first place. I went to an exceptional homeopathic expert (John Ottavio) who also was nearby.

There were four drugs of chemo used, vincristine, cyclophosphomide, adridamycin, and methotrate one every week initially for one month and then bimonthly. After one month he went into remission, yea!  He also received prednisone every day at first and then three times a week. To help with any side effects John gave him noxvomica for vomiting and lethargic symptoms and carcinosin for adverse chemo effects. In eight months he only experienced two bouts with vomiting and being under the weather. He was able to live a normal life, just with caution to not over exert and obtained both his AKC and ASCA CDX titles.

Life was going on with a somewhat normal rhythm when suddenly in April Teddy experienced for lack of a better word a stroke. He was unable to walk in a straight line, couldn’t keep food down and one side of his face was paralyzed. The vet gave him fluids for a few days, John gave him bothdrop and belladonna and this too he recovered from almost completely. I even had John perform acupuncture to help expel toxins from his body.

My reason in writing this text is to let people know that there are always many different sources to choose from when trying to find treatments for any sick animal. I know that money comes into play but they rely on us for their care and deserve the best. I have no regrets on my commitment to Teddy’s illness only that he couldn’t last forever. Now his memory is forever in our hearts.